You are being poisoned. Did you know? 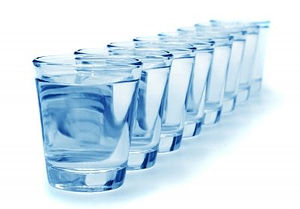 You are being poisoned. It’s being done through the public water supply, and if you haven’t guessed what it is yet – without any further ado, it’s fluoride – a potent neurotoxin that harms multiple body functions. It’s not for me to say whether you are being PURPOSELY “dumbed down” as a sort of population control by those who both allowed and promoted the dumping of this substance into what you drink. I don’t buy that myself; but make no mistake, you ARE being dumbed down – both physically by swallowing it and figuratively by believing the lies. Ironically, your possible lack of outrage over the injustice could very well be due to the fluoride you’ve now got in your system. You see, it can make you more passive. More “go with the flow … whatever …” Do you know the name of the compound in Prozac? Fluoxetine. Interesting. With heavy fluoride exposure due to the contamination of our public water supply, not only your brain, but your thyroid, your bones, your joints and more … all have much to lose. But here’s the problem, by admitting their mistake and reversing the process, the government has much to lose as well. Namely, trust and reputation – in their minds at least. Do we really trust the government anyway? I guess many do. That’s part of the problem with our health.

Let’s start with some quotes, since some would immediately question my own credibility based the selection of letters after my name compared to the letters after some other names. I understand the suspicion, so let me allow some other people talk to you for a little bit:

Albert Schatz, Ph.D – “Fluoridation … it is the greatest fraud that has ever been perpetrated and it has been perpetrated on more people than any other fraud has.”  (Discoverer of streptomycin and Nobel Prize Winner)

Dr. Charles Gordon Heyd – “I am appalled at the prospect of using water as a vehicle for drugs. Fluoride is a corrosive poison that will produce serious effects on a long range basis. Any attempt to use water this way is deplorable.”  (Former president of the American Medical Association)

Kathleen Thiessen, PhD – “Many Americans are exposed to fluoride in the ranges associated with thyroid effects, especially for people with iodine deficiency” … “The recent decline in iodine intake in the U.S could contribute to increased toxicity of fluoride for some individuals”

Dr. Griffin Cole, dentist in Austin, TX: “I still don’t think it’s enough, honestly” … “I don’t think there should be fluoride in the water at all… Ingesting fluoride in any form does nothing for your teeth”

You should definitely continue researching on your own, but to summarize for you the scary findings of many scientific studies, fluoride:

-causes fluorosis (obviously, hence the name of the problem)

-harms the brain (124 studies indicating this, including the lowering of children’s IQ)

-disrupts the synthesis of collagen

-interferes with the immune system

Avoid it by drinking reverse osmosis or distilled water. Refrigerator filters help with chlorine, but do not remove fluoride. If you drink bottled water, make sure it is purified by reverse osmosis and that they have not added fluoride back in post purification.

Think fluoride taken internally is at least good for the teeth? Think again.

Even the government (who has much to lose by admitting their terrible mistake), at this time, is at least willing to admit the following, found on cdc.gov:

“About one third of children and adolescents 6 to 19 had enamel fluorosis of their teeth, although most was very mild.”

Hmmm… getting too much fluoride, are we? (Here’s where we are going folks: any ingested fluoride is too much)

To know that fluoride is damaging a tissue in the body that we CAN see, and to assume absolutely no damage to other tissues that we CANNOT see is a FALLACY in SIMPLE LOGIC.

“In some regions of the United States, public water systems and private wells contain a natural fluoride concentration of more than 2 mg/L, and at this concentration, children 8 years and younger have a greater chance for developing dental fluorosis, including the moderate and severe forms. These children should have an alternative source of drinking water that contains fluoride at the recommended level.”

“Fluoride inhibits enzymes that breed acid-producing oral bacteria whose acid eats away tooth enamel. This observation is valid, but some scientists now believe that the harmful impact of fluoride on other useful enzymes far outweighs the beneficial effect on caries prevention.” – UNICEF, Dec 1999

And thankfully both the American Dental Association and the Centers for Disease control have issued warnings about mixing baby formula with fluoridated water. (yet another good reason to breastfeed)

Furthermore, in January of 2011, the Department of Health and Human Services (HHS) and the Environmental Protection Agency (EPA) announced that they plan to reduce the recommended amount of fluoride in public drinking water.

Just listen to them spin this junk:

“One of water fluoridation’s biggest advantages is that it benefits all residents of a community—at home, work, school, or play,” said HHS Assistant Secretary for Health Howard K. Koh, MD, MPH.”

[you should be getting pretty ticked off by now, but here’s the rest of the rhetoric]

“Today’s announcement is part of our ongoing support of appropriate fluoridation for community water systems, and its effectiveness in preventing tooth decay throughout one’s lifetime.”

“Today both HHS and EPA are making announcements on fluoride based on the most up to date scientific data,” said EPA Assistant Administrator for the Office of Water, Peter Silva.

“EPA’s new analysis will help us make sure that people benefit from tooth decay prevention while at the same time avoiding the unwanted health effects from too much fluoride.”

So what’s the current fluoridation level? Glad you asked. Here’s your answer in the same article:

“HHS’ proposed recommendation of 0.7 milligrams of fluoride per liter of water replaces the current recommended range of 0.7 to 1.2 milligrams.”

Up to 1.2 milligrams per liter! Let’s put that in perspective, shall we?

On the back of any tube of toothpaste, you’ll find the warning: “If more than used for brushing is accidentally swallowed, get medical help or contact a Poison Control Center right away.” (Why the seeming double standard? Frankly, the FDA does not have jurisdiction over municipal water supply.)

Now, if you drank the minimum recommended 64 oz of water per day, that is 1.9 liters, which would give you 2.28mg of fluoride. Is that a problem? Consider this, in 1 stripe of toothpaste across a toothbrush, you would get 2.25 mg of fluoride. Now, a better recommendation for water intake is 1/2 your body weight per day in ounces. Most of us weight more than 128 pounds, much more. But let’s be conservative and say somewhere between a lean healthy man at 185 and a lean woman at 125 lies an theoretical “average” healthy human of 155 pounds, in need of 77.5 oz of water per day. That person would consume 2.76 mg of fluoride per day. Well that’s more than is used for brushing!

Of course, if you’ve been reading carefully, you already noticed the government’s admission that some regions of the U.S. contain as much as 2 mg fluoride per liter water! That is to say that if the average healthy person was drinking the recommended amount of water, they would make a DAILY HABIT OF SWALLOWING IN FLUORIDE THE EQUIVALENT FOUND IN DOUBLE THE TOOTHPASTE THAT IS — USED FOR BRUSHING. They not only should be calling the Poison Control Center, they should be calling the friggin’ government!

Well thank God many have started doing just that. The Fluoride Action Network has been formed to push for the removal of fluoride from the public water supply.

LISTEN TO THESE WORDS from Dr. Connett, who authored the book The Case Against Fluoride:

“It’s a substance called hexafluorosilicic acid or its sodium salt: silicon fluorides…These silicon fluorides are captured pollutants from the phosphate fertilizer industry. When you’re making phosphate fertilizers… the process generates two very toxic gasses; hydrogen fluoride and silicon tetrafluoride….For about a hundred years, these decimated the local area — the vegetation; crippled cattle and so on. Eventually, they were required to capture these toxic gasses, using a spray of water. That spray of water produces silicon fluorides. …That scrubbing liquor cannot be dumped into the sea by international law. It can’t be dumped locally because it’s too concentrated. But if someone buys it, it’s no longer a hazardous waste, it’s a product… Who buys it? The public water utilities buy this stuff and put it in our drinking water. It’s absolutely absurd.”

Fluoride is also a by-product of aluminum manufacturing. You see, fluoridation of the public water supply has been coincidentally (ahem) quite the money saver for companies that would otherwise be left with the problem of disposing of massive amounts of toxic waste. Instead, in a genius cooperative deal between the government and some big businesses (this goes way back), the government buys their waste and poisons us with it in the name of public health. Wow.

Because of all the propaganda, many people think fluoride is an essential nutrient for your body. IT IS NOT! There’s no such thing as fluoride deficiency. But wait! You say. There is an RDA (recommended daily allowance) for fluoride. Ah, good observation. But did you know that the RDA’s, which were established in 1941, shortly after the public water fluoridation began, have since been absorbed into the RDI’s (reference dietary intake)? Guess what? There is NO RDI for fluoride now! Isn’t THAT interesting? Furthermore, guess what the old RDA was – 2-3 mg. Yep, even more than what is contained in a stripe of toothpaste across your toothbrush. The RDA’s recommendation exceeded the amount that requires toothpaste manufacturers to put a warning label on their products! By the way, you should know by now that the RDA’s don’t carry much weight any more, and many nutritionists disagree with suggested amounts. Although the amount of fluoride they recommended could CA– USE disease, the low levels of actual healthy nutrients were just enough to PREVENT disease, not necessarily provide optimum nutrition.

I know some of you are STILL not believing me, so let me quote the National Academy of Sciences:

“Fluoride is no longer considered an essential factor for human growth and development.” This statement was made in 1993 ! (can someone say “dragging our feet?”)

Fluoride is instead toxic.

Now … that doesn’t mean it hasn’t served a good purpose:

In the 1800’s, it made a very effective rat poison, but since then, the industry has turned to something safer for the environment: your blood pressure pills. No, I’m being funny. The blood thinner warfarin (Coumadin, etc) is now used to kill off the ugly little rodents.

In the 1930’s, in Europe, it was used to treat hyperthyroidism – an overactive thyroid. It worked. Problem was, it worked TOO well, and essentially killed off thyroid function. So that stopped too.

It’s used in some pesticides as well.

So by now, you should realize that ingesting fluoride is a terrible idea. But should you use it ON your teeth? That’s another issue and one I’m not going to cover here, and quite different from ingestion. Let’s for a moment though, assume that the topical use of fluoride is helpful to teeth. I like what Dr. William Hirzy, Vice President of the EPA union says:

“If you want to prevent sunburn, you don’t drink suntan lotion. You put in on your skin. So if you want to have the benefits of fluoride in oral health, what you do is put it on the surface of the tooth, and not drink it.”

Dr. Hardy Limeback, professor of dentistry at the university of Toronto adds:

But let me leave you by reiterating the very first quote I shared. I hope you take the message to heart:

“Fluoridation … it is the greatest fraud that has ever been perpetrated and it has been perpetrated on more people than any other fraud has.” -Professor Albert Schatz, Ph.D. (Microbiology), Discoverer of streptomycin and Nobel Prize Winner