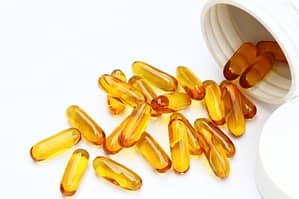 Fish oils are finally beginning to get their long-overdue, well-deserved recognition as healthy fat burners. What’s that you say? An oil, a FAT, as a fat burner? Believe it.

As you may know, fats are separated into two categories: saturated (solid or semi-solid at room temperature) and unsaturated (liquid at room temperature). These classifications are based on the chemical structure of the fat. Saturated fats are unnecessary to the health of the human body, and stimulate a rise in LDL, otherwise know as the “bad” cholesterol. Unsaturated fats, however, can provide health benefits.

The average American’s diet generally contains enough omega-6 fatty acids, but is strikingly deficient in omega-3’s, which are found in freshwater fish, nuts, and seeds. In spite of a desirable ratio range of 1:1 to 4:1 of omega-6 to omega-3 fatty acids, the average American’s diet is slanted an amazing 25:1. This is a sad fact, considering the role of omega-3’s in the body’s metabolism. Omega-3 fatty acids increase the fluidity of cell membranes, allowing for faster transport of fuel and chemical signals, as well as faster protein synthesis. They also suppress the body’s production of fat-storing enzymes, while increasing fat transportation to the cells for oxidation.

Sources of omega-3 fatty acids include fish and flax seed oil. The flax seed oil contains ALA, which is broken down by the body to EPA and DHA, the chemicals that finally go to work for you. However, flax seed oil also provides omega-6 fatty acids, of which most of us already get plenty if not too much. Fish oil, on the other hand, contains amounts of EPA and DHA already, which can be quickly and efficiently used by the body. Furthermore, EPA can be converted to DHA as needed, making EPA in supplement form very valuable. In summary, the majority of people will benefit most from an omega-3 supplement that contains a large amount of EPA along with some DHA.