Wheat – Is it Good or Bad? Why Intolerance without an Allergy? 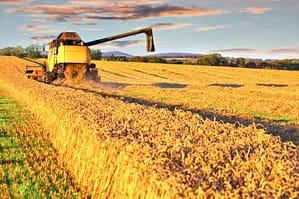 It sounds like such a simple question, and many are begging for a simple answer. Well, if that’s what you happen to seek, you might as well skip down and click the link to my blog to only read the last half of this article. But it you start at the beginning, you’ll have a much better understanding of the subject. Besides, you’ll get to amaze your friends with your insight when the topic arises at the next meal after someone opts for wheat over white bread. Isn’t THAT worth something?

So what exactly is wheat?

Wheat is a cereal plant, with more land area dedicated to it’s growth than all other crops – combined! It is produced to the tune of 650 millions tons annually. As its grain is used to make the flour for breads, pastas, cereals, and many, many other popular food products, it is the world’s most traded crop.

When did wheat consumption begin?

Wheat helped establish the world’s first civilizations in the Fertile Crescent of the Middle East.One of the oldest and most popular books in the world, the Bible, mentions wheat in no less than 35 of it’s verses. In fact, there may not be another book more pro-bread than the Bible, when you consider it being a sign of God’s blessing, a staple in God-commanded Jewish feasts, a necessary part of keeping church ordinances, and an integral piece of God’s ancient temple itself. When you study food in the scripture, Jesus’ prayerful words “give us this day our daily bread,” metaphorical or not, nears an understatement.

Now, even if the Bible is but a book of fiction to you, secular scientists have dated the original cultivation of wheat as occurring between 3,000 and 10,000 BCE (that’s “before common era,” recently switched by historians from long-held standard B.C. or “Before Christ.”) So even without the Bible as a resource, clearly, wheat was anything but avoided by early civilization.

Is today’s wheat the same as ancient wheat?

This is where the topic of wheat in regards to our health becomes confusing. When you say “wheat,” to which of the following are you referring?

You might be surprised to see this short list of some of the different the varieties of wheat. The fact is, we have been cross-breeding this important crop for decades, trying to create something that fits our needs, desires, and convenience for every location and purpose we can visualize.

In the 1980’s, transgenic work on wheat began, and we “successfully” transformed it in the early 90’s. We desired wheat that would grow in a variety of climates, be resistant to a variety of diseases, could survive heavy doses of herbicides and insecticides, and would work very  well for bread and baking. Speaking of baking, it’s helpful to understand that gluten (a composite made of 2 proteins: gliadin & glutenin), is responsible for the “doughiness” and  the ability for bread to rise. With that in mind, you can see why commercial agricultural companies would prefer a higher than normal gluten content in the wheat they sell, if such a thing were possible. Unfortunately, it would be. And although still a bit debated, some experts estimate that today’s wheat has up to 200-fold the gluten content of the wheat 2,000 years ago.

So with all those goals in mind and the technology to “safely” make it happen, we go to work in the lab. Enter “frankenwheat.” Now when we think of Frankenstein, we think bigger and taller, but counterintuitively, “frankenwheat” is actually shorter, stockier, and could be called starchier as well. It’s increased levels of amylopectin A, a glucose polymer, is loved for it’s ability to make very sweet bread products.

Does organic wheat pose the same threat to our bodies?

The good news is that organic food cannot be genetically modified. But here’s the bad news: “frankenwheat” is not TECHNICALLY genetically modified. Meaning, we haven’t inserted or deleted a gene in the lab. Instead, it’s been heavily cross-bred and drastically changed from varied and extreme modern techniques, even including things like exposure to poisonous chemicals and a process known as gamma-irradiation. These techniques are used to mutate the wheat. Interestingly, in the animal kingdom for example, we have never seen a truly beneficial mutation. Meaning, the sheep with 3 legs didn’t run faster and the fish with three eyes didn’t see better. Mutations have instead always caused complications and problems among humans and animals. Yet be it far from us to recognize the danger in eating mutant foods!

The take-home message is this: just because something has not had a gene inserted or deleted, does not mean that it has not been altered. For example, today’s wheat is literally 2.5 feet shorter than the wheat 100 years ago. Plainly, SOMETHING has changed.

Now, returning to the warrants of organic wheat. Organic production processes DO eliminate the use of harmful herbicides and pesticides, so it will be healthier no doubt. With deeper roots and more for soil, the mineral content will likely be improved as well. However, it does not necessarily guarantee the lower glycemic index, lesser gluten level, unaltered gliadin, and unmodified lectin of ancient wheat. I wish that choosing organic wheat meant sidestepping all the dangers of “frankenwheat,” as many experts have accidentally implied, but the reality is just not that simple.

So should we totally avoid wheat, or is there room for it in a healthy diet?

Avoiding wheat altogether is not exactly a bad choice (if you have plenty of other fiber sources in your diet that is), but there are probably many other things you should work on avoiding altogether before wheat lands on your personal “no” list. Meaning, if you are still consuming artificial flavors, colors, dyes, sweeteners, aluminum, and preservatives … not to mention trans fats, nitrites, and other obvious health-compromising ingredients … start there when building your “absolutely not” list. Of course, if you have been diagnosed celiac disease, or suffer obvious acute symptoms following wheat consumption, avoiding it altogether is a no-brainer.

The following information and advice is for the rest of us. Funny enough, much like in the case of alcohol, avoiding the “hard drinks” and controlling the amount you consume can help you avoid many (but not all) of the downsides, avoiding “hard wheat” might be the secret to minimizing the negative effects of today’s frankenwheat. Let me explain: there are 6 major classifications of wheat:

You’ll notice that there are 4 hard versions and 2 soft versions. The hard type has the highest gluten content (and therefore the highest altered gliadin and lectin content) and is used in the making of doughy breads and other similar food products that must rise. The soft versions, in contrast, have much less gluten and are used in crackers, flatbreads, etc. Ironically, when you eat physically harder wheat products, you are eating softer, healthier wheat. So rule number one for a flat healthy stomach is to eat flat, so to speak. Hey, maybe the biblical people were onto to something with their feast of UNLEAVENED bread? Keeping some of these healthier wheat options in your diet will make getting your daily fiber a bit easier.

So what has the modification and mutation of wheat taught us?

It seems we can’t win when we start messing with things too much. So have we learned our lesson? Large food companies may or may not be keen to the negative health effects of profit-promoting technologies, but one thing is for certain:  their concern for potential harm does not compare to their concern for financial return. Consumers must be the drivers of change via what they demand going into the future.