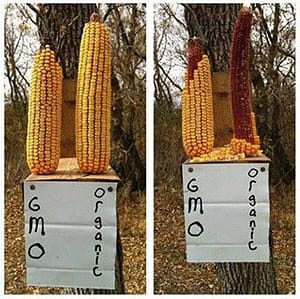 In 1946, scientists made a discovery that we have unfortunately abused ever since: DNA can be transferred between organisms.

We are now reaping the “benefits” (read: sarcasm) of about 25 different genetically modified foods. In a cancer-filled world, you wouldn’t think that we could sleep at night while screwing with the DNA of life, but apparently, our collective conscience isn’t that sensitive. (Then again, to be fair, no one seems to be able sleep anymore either.)

I’d be surprised if you didn’t know anyone with allergies, asthma, autism, arthritis, or an auto-immune disorder. But, have you heard of “leaky gut syndrome,” and its close relationship to these ever-more-common conditions?

We have a big problem in America: increased gut permeability. That is, food particles, in pre-digested or only partially-digested form, are hitting our bloodstreams and shocking our systems. Not good.

Think about it: how long do you think your health would survive if you took a chicken breast through an IV, or bread, or yogurt, or even strawberries? Not long, right? Our bodies are designed to absorb food AFTER the digestion process. Even if the food is healthy, it isn’t healthy to your body when absorbed prior to digestion.

What might be the result of such food particles hitting the blood before being properly prepared by digestion? Well, in the best case scenario, irritation and inflammation. In the worst case, the immune system might be provoked into launching an attack, no doubt trying to protect itself from tissues contaminated with foreign particles.

So what in the world has caused this “leaky gut syndrome,” and how can we fix it?

Glad you asked! There is an “elephant in the room” when it comes to potential culprits: genetically modified corn

Now before you write me off as some “health nut on a high horse,” hear me out and finish reading. Then you can still write me off if you want, but at least you’ll learn something first :)

Scientists at Monsanto (the global bio-tech company that controls much of our food and consequently our health) have inserted a gene into corn that causes corn to produce it’s very own insecticide. Yep, a gene from a little bacteria by the name of bacillus thuringiensis is used for its production of endotoxins that cause the stomachs of insects to become porous, thereby eventually killing the insect. So now, instead of spraying insecticides onto the corn … the corn just PRODUCES its own insecticide! Now if you just read that and your only reaction was something to the effect of “how genius and convenient,” I’m not sure I can help you and your health anyway :) But I’ll go on, because it gets worse.

Remember the 1946 finding? That genes can TRANSFER between organisms? Guess what houses at least 1,000 different species of live organisms? YOUR BODY! (gross, right?) Sorry, that’s the way it is. And the fact is that you wouldn’t be alive without most of them. But what would happen if the endotoxic gene from bacillus thuringiensis transferred to any of the multiple organisms in your gut? If you haven’t guessed it yet … you’d become a pesticide factory, constantly producing a substance that makes your gut more and more porous, or “permeable.” Enter “leaky gut syndrome.”

I’ll let you think about and research that for yourself. But I can tell you this much: we have a right to know when we are putting GM foods into our body. Unfortunately, the government does not currently require manufacturers to label their food as genetically modified. That might be about to change in California, and I certainly hope it does. Europe only allows for one genetically modified organism – potatoes – but those potatoes are not even intended for human consumption. They are grown for their starch content for use in manufacturing things like paper.

If we are going to have these “franken-foods” in the U.S., the least we can do is label them so citizens can make a choice whether or not they enter our bodies. Right now, you are likely in the dark, and who can blame you, when these things aren’t even labeled as such? (For now, make sure you don’t touch any corn that isn’t at least labeled organic or GM Project Verified)