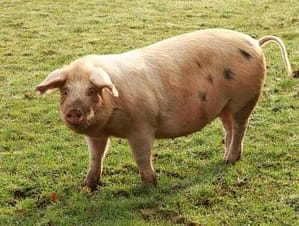 1. A pig will eat anything: urine, feces, decaying flesh, maggots, and even the cancerous growths off other pigs. Their meat does not go unaffected. A cow, on the other hand, eats a vegetarian diet of mainly grass.

2.  Pigs have but one stomach to digest their food, and subsequently absorb the toxins in their foul diet in about 4 hours. A cow actually has 4 stomachs to process & cleanse their  food, helping to further filter their already cleaner diet over a much longer digestion period.

3. Pigs have more “bio-similarity” to humans than do cows.  Hence, pig organs are less likely to be rejected by the human immune system, compared to organs from other animals. Though an advantage in surgical organ transplantation, this becomes a a big disadvantage when you consider the easy transfer of pork pathogens to humans.

4. Bacteria which becomes resistant to the antibiotics given to pigs is being passed back to humans. For example, Staphylococcus Aureus became resistant to tetracyclines and methicillins given to pigs. Now, ST398, a antibiotic-resistant strain of the infection, can now be found in humans. This trend will likely and dangerously continue.

5. Pigs carry over 30 diseases and 12 parasites, many of which are easily transferred to humans. Of particular note is the trichinae worm, which can instigate trichinosis in humans and all the resulting digestive disorders, gall bladder complications, rheumatism challenges, meningitis, and even multiple sclerosis symptoms.

6. Pork has about twice the saturated fat as beef, packing on the calories, crowding out important nutrients from other healthy foods, and contributing to sludgy blood and increased cardiovascular risk.

7. Consumption of fresh pork can cause not only deadly disease, but also a variety of acute reactions including inflammation of the appendix, gall bladder, stomach, & intestines.  It can also quickly cause eczema, carbuncles, & abscesses. Cooking helps, but whether or not there is a “safe temperature” to kill ALL the various bacteria & viruses in pork is still being debated.