Carrots and Bananas: Bad for You? Glycemic Index Talk 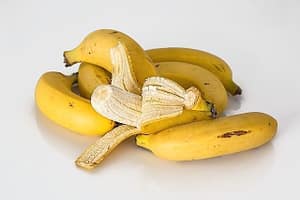 Sitting outside a Dallas Starbucks yesterday while enjoying a turkey-bacon egg white sandwich and a 1/2-pump peppermint green tea, I overheard a group of women sharing nutrition insight with one another. They had obviously just finished a workout, as evidenced by the audible moans while squatting into their chairs and the similar grunts of pain when they stood up to leave. What got my attention was one lady’s bold proclamation that carrots were bad for you – straight-up sugar-filled red-devil roadblocks to weight loss! Their sugar content was sure to send blood glucose and insulin levels soaring, stopping the bathroom scale’s descent dead in its tracks. “Oh my goodness, I routinely have carrots with my dinners,” another admitted … “no wonder,” she lamented while feeling relieved to solve the reason for her recent stagnation.

Having coached hundreds of people over the last 17 years (holy crap I shouldn’t have paused to add that up), this made me smile. I know where the carrot demonization comes from and was wondering how long it would be before one of the ladies brought up the vegetable’s often-accused fruity partner in crime. Sure enough, 2 minutes and 42 seconds later, the message arrived from her friend: “yeah, they are like bananas … they are all sugar and make weight loss really tough.”

There you have it: carrots and bananas – the reason America is overweight. So what started these pervasive myths, and is there a shred of truth to be inferred from the fruit and vegetable scare tactics?

Well, we can probably thank a little something that was published in 1981: the Glycemic Index. This helpful-turned-unhelpful-via-misinterpretation-and-overglorificaton little chart ranks foods by how much the available carbohydrates within will raise your blood sugar. (I hope you are as impressed by that hyphenated adjective as I was) Straight glucose, of course, tops the charts with a “glycemic load” of 100. Scientifically, that means that after a 12-hour fast, ingesting pure glucose has the greatest effect on your blood sugar and resulting insulin levels over the 2 hours post-ingestion, at least compared to everything below it on the index. A food’s position on the chart tells you its relative impact on your blood sugar compared to other foods. Does that mean that you will achieve the greatest health and ideal body by avoiding all foods high on list and only consuming foods low on the list? Not necessarily. But controlling insulin can help slow fat accumulation and reduce inflammation. So I’ll give you this: if 2 groups of similar people had a weight loss contest and ate 100% carbohydrate diets with the same number of calories, the same number of meals, the same nutrient timing, the same amount of water, and the same amount of fiber …. but one group ate high-GI foods and the other group ate low-GI foods, I’d put my money on the low-GI group winning the weight loss contest. Even then, I’d only do that if the 2 groups ate the same % of their carbs from fruits and vegetables.

Here’s the problem: real life doesn’t mimic that scenario. We eat at different times and in different amounts. We eat fat and fiber and protein in addition to starches, and we combine our foods in a variety of ways. All of these factors impact a food’s “real glycemic load,” or should I say a MEAL’s real glycemic load.

For example, if you drink a glass of lemonade by itself, your blood sugar will soar and insulin will follow. Now, mix that lemonade in some Metamucil and eat a grilled chicken breast alongside it. Your blood sugar concentration won’t come near to the result of the lemonade-alone scenario, and your body’s insulin response will be heavily dampened. Why? Because the fiber in the Metamucil slowed the absorption of the sugar in the lemonade, and the amino acids absorbed from the chicken breast diluted the sugar in your blood. So you see, good food combinations can help control insulin. Now, there isn’t much need to have lemonade in your diet, but you shouldn’t miss out on the vitamin A and phytonutrients in carrots, for example, or the potassium and fiber in a banana … because of your glycemic fear. Just consume them in balance with other fiber sources and lean protein. Everyone should be eating at least 5 handfuls of fruits and vegetables a day anyway, so don’t throw out 2 of the easiest to eat. You won’t do your health any favors. We all can find much worse within our diets that we may want to consider cutting, long before fruits and vegetables need the axe.

Combinations of a given food with others are important to consider when evaluating “real” glycemic load, but so is the quantity of a given food consumed. What do you think affects your blood sugar and insulin levels more: 1 dinner roll at a restaurant … or 8 of them? I do wish it didn’t matter, as 8 makes me very happy and 1 makes me tempted for 7 more :) But that’s life. All success in life come from being able to say no to the wrong things and yes to the right things. Nutrition, health, and fitness are no exceptions. So unfortunately, the 8 rolls are going to hurt you more than the one. Of course, as long as you don’t have carrots with your entree’, you should be fine, right? :)